Kaunas has a good and varied collection of sights, the touring of which can very well be a relaxed activity and it is not necessary to go to many sights. The Old Town has a few impressive sights around its main square (Rotušės aikštė) and can be explored in a couple of hours. There are a few finer-than-normal churches in the old town and new parts of the city center, and there are museums on the new side of the city center that some want to visit.

Exploring the sights is not the number one tourist attraction in the city, as you can do everything at your own pace and in your own mind while enjoying the atmosphere and views of the old town and exploring the city anyway. 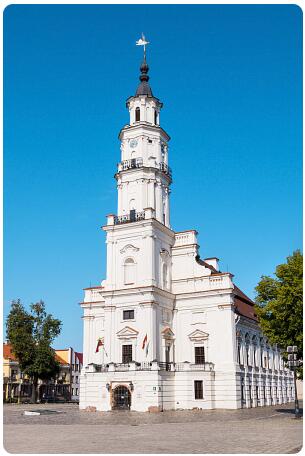 The Kaunastic Card is a city card that entitles you to discounts and free admission, but it may not be worth getting it at least in advance. The card can be bought on Lithuanian-language pages, where you can’t find out just about anything, and so you should wait until you can get to Kaunas and even look at the tourist information to see if the card could be used.

Kaunas Tourist Information Center is located in the town hall and is open from 9 am to 6 pm during the week and from 10 am on weekends. It closes at 4pm on Saturdays and 5pm on Sundays.

Kaunas bus station has maps and leaflets about Kaunas, so if you arrive there from the airport, you should at least bring a map.

Kaunas City Hall is a unique building that gives the final touch to the central square of the Old Town. The original town hall appeared on the market square, which was a bustling trading place and important trade route in Hanseatic times, but the first town hall burned down and construction of the new, current town hall began in 1542. The house was built slowly, and from the very beginning The house was further built in the Renaissance style in the 17th century, and in the 1770s it received a third addition, with Baroque features. From the 19th century onwards, the town hall began to take on various roles, and at one point it was a church, at one time it was the headquarters of several different clubs, and it was not until 1869 that it became a town hall. Since then, its status has been established, in 1973, ceremonies were held there and the last renovation took place in 2005.

The most striking feature of the building is its beautiful tower, which extends to a height of 53 meters, and is commonly referred to as the “white swan”. Today, the house has wedding ceremonies and formal occasions, and the main reason for a tourist to enter is the part of the city museum under its shelter . There you can learn about the city’s colorful and varied history, with an entrance fee of € 2.5 for adults and € 1.20 for children (open: Mon-Sat 10 am-6pm, Sun until 4 pm). 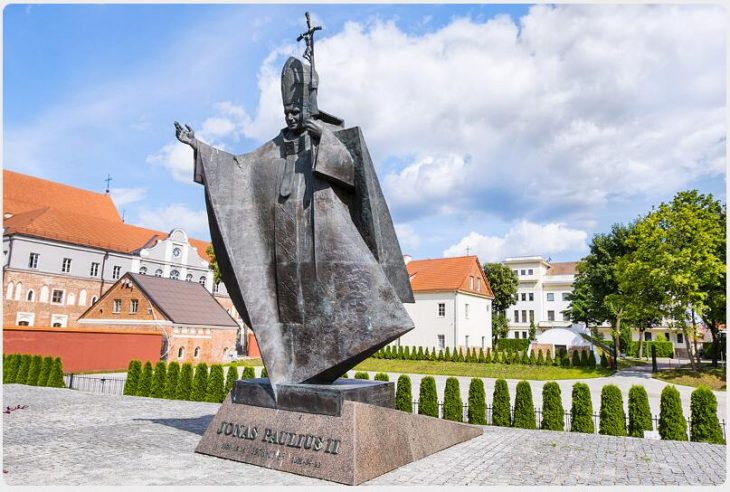 Right next to the central square of the Old Town, it is easy to move to a large park area, which together with the central square is the real old-fashioned core of Kaunas. The park area is quite large, and there are a few attractions in and around the area, which, however, are usually quickly inspected. One significant area in the park is the so-called. Paavinmäki, who has a memorial to John Paul II, as he visited Kaunas in 1993 and held a service there.

Near the Pope’s Monument is one of the city’s most significant buildings. Kauno Pilis, or Kaunas Fortress, is located at the intersection of the Niemen and Nerisjoki rivers, and was built in the 14th century to repel crusader attacks. Forts of the same style are encountered elsewhere in Lithuania, but this was the first brick fortress in the region and also the only one with two protective walls.

The first dwellings and department stores in Kaunas were built next to the walls, and there have been settlements around the castle since at least the middle of the 14th century. The fort was the center of the city until Kaunas became an official city and part of the Hanseatic League in the early 15th century, and then both merchants and others moved a few hundred meters away, to the present central square of the Old Town.

In the 16th century, the fort served as a prison, and it is still claimed that the prisoners who died there haunt, especially in the tunnels below the fort. Today, there is a museum in the premises of the fort , where you can learn about the history and fortress of Kaunas. Even more popular, however, are the performances that take place during operetta festivals in the summer, for example, and the various events provide a good opportunity to enjoy the unique atmosphere of the fort in the evenings.

The church next to the fort and the adjoining monastery (St. George the Martyr Church) are, like the majority of the churches in Kaunas, Roman-Catholic, and thus it is from within worth seeing. You can go there for a moment to visit, and at the same time you can get around some around the church, where there are several beautiful buildings. 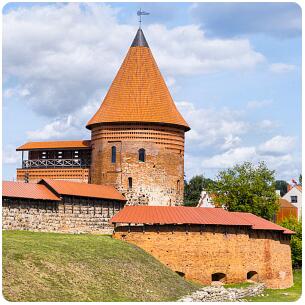